Good Morning! Today we are featuring  the wedding that we organized and designed on July 7th, San Fermin Festivities day. Francisco and Olga, a couple who despite living in Madrid, chose San Sebastian and the surroundings to get married. For both it was going to be their second marriage and, perhaps that’s why they were clear from the beginning that what they wanted was to enjoy their day together with their family and friends and not worry about everything else. So after numerous emails, calls, WhatsApps, meetings and others we managed to design one of the best days of their life. The place chosen was a txakoli winery located very close to San Sebastian with a spectacular natural environment among vineyards that captivated us from the first moment we went to visit it. Directed by Roberto Ruiz and his team who do a fantastic job. Olga, the bride, decided to dress and makeup in the same venue, the one in charge of doing it was Amaia Make up. It was clear that she did not want to be the typical bride dressed in white and, therefore, decided to dare with a beautiful feather skirt designed by Cristina Piña combined with a white blouse, which gave her a point of incredible sophistication. She was beautiful!

Although during the week leading up to the wedding we had the threat of rain and feared until the last moment that the rain fell, in the end luck was on our side and the ceremony, lunch and dancing were done outside. The idea was to create a familiar and intimate atmosphere, since there would be only about sixty guests and the couple wanted to do something simple. We framed the area of ​​the altar with a beautiful square arch of white and green flowers that was at the same time background for the couple during the ceremony.

The groom walked down the aisle at the hand of his mother and the bride chose his two sons as godparents. It was super exciting to see how all the guests got up to meet them and between applause and smiles of happiness welcomed them to that great moment they were about to live.

Roberto Ruiz, a great friend of the couple, was the one who celebrate the ceremony. It was a very emotional, intimate and family wedding, although there were also laughs. But the best of all is that you breathed a lot of happiness among all of them and that’s what we like most about weddings, see. our couples happy and enjoying their great day. After the ceremony and as a surprise for the couple, two basque dancers (named dantzaris) danced the aurresku (the dance in honor of the couple).

After the ceremony, the best thing awaited them: the reception. The local chef Roberto Ruiz and his team prepared several food stalls where guests could taste an endless number of Basque Gastronomy products (talos- corn tortitas made at the moment-, oysters, cheeses, Tolosa beans …) decorated with Basque aesthetics, as well as as the tasting of txakoli from the own barrels and beer, which did not leave anyone indifferent. We managed to create an informal and family atmosphere in which all you had to do was enjoy and eat.

As it was the main day of San Fermin festivities, and as a surprise, during the cocktail we recreated the inaugural rocket, we distributed red scarves for everyone and shouting  ¡Viva San Fermín! we launched the rocket. Super fun! 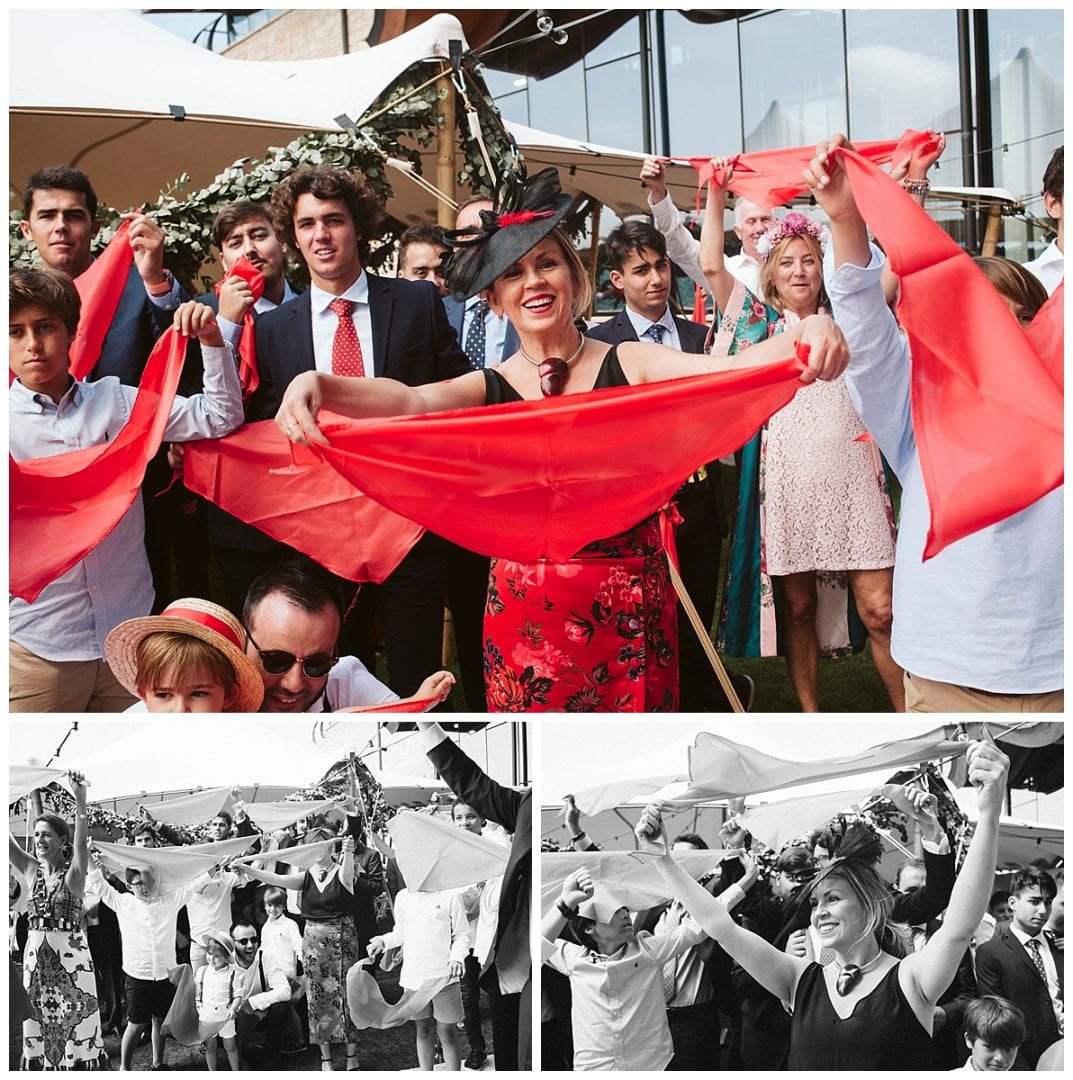 After the reception, the food was still waiting for them! As there were not many guests, for the decoration of the tables we were inspired by those wonderful films of great family meals with endless elongated tables, between vineyards “italian style” .. come on from the most Provencal! The result was amazing! We created a large table in the shape of a “U”, which we decorated with red checkered tablecloths on a white tablecloth. For the centerpieces we put pots with different aromatic plants that each guest could then take as a souvenir. The meal consisted of a light salad and a T-bone steak with red peppers cooked on the grill in view of the guest.

Next to each plate was a can of olive oil with the personalized label with the names of the newlyweds, as well as the name of each guest on the napkins, so that everyone knew where to sit. As a curious detail, the bride wanted to make a surprise wink to her best friends by placing a tangerine on their plates and, only they understood the meaning! For women we put a pashmina on each chair as a gift.

It was a wedding full of details and, for the time of the dance there was also some espadrilles in case some wanted to get rid of the heels, that always comes well …

It was a different wedding and we enjoyed organizing and designing every detail so that everything would be perfect that day. Thanks to all the suppliers that made it possible for everything to be perfect and, especially to the couple, Olga and Francisco for trusting us to be present on this day.

We wish you all the happiness and a life full of good moments like your wedding!!